The 10 Best Brook Trout Flies of All Time

Brook Trout are some of the most entertaining fish to catch.  They put up a good fight and always taste incredible cooked over a fire.  But what are the best Brook Trout flies of all time?

Brook Trout can be caught on a variety of different flies, including, streamers, dry flies and nymphs.  There are surely more flies out there that you could use, but those are the most standard for catching Brookies.

These are the 10 best Brook Trout flies

Brook Trout eat a variety of meals.  When fly fishing them, be prepared with plenty of flies on hand – it might take a couple flies to start hitting them.  If you get to your secret fishing hole to find out that the fish aren’t biting, they probably won’t for the rest of the day, on that particular fly.

In that case, change it up.

Each and every fly on this list is going to catch a lot of Brook Trout in one location or the other.  One fly might not work here, but might be a killer in another location.  It’s all about having a wide variety of flies so you aren’t going home empty handed.

Let’s dive into it. 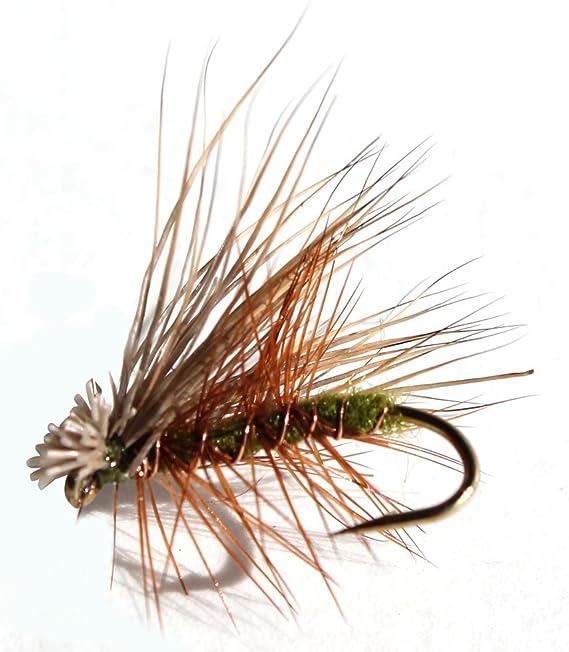 The Elk Hair Caddis Fly is by far one of the most popular Trout fishing dry flies on the market.

The Elk Hair Caddis Fly is one of the most productive dry flies for Brook Trout.  It resembles little Caddis Flies and Stoneflies, both of which are popular Brook Trout meals.

This fly will catch fish throughout most of the year, but it will be most successful during a hatch.  A hatch is when flies are transitioning from the early stages of life, to an adult.  Flies gather in large groups on the water, resulting in a lot of Brook Trout gathered in the same location.  If you find yourself a hatch, throw an Elk Hair Caddis fly into the water and you’ll probably have something on the line shortly thereafter.

Bottom line, there is a reason that many fly anglers keep an Elk Hair Caddis fly in their fly box when going after Brook Trout, they work.

The Parachute Adams fly is the one fly that every fly angler should have in his or her's fly box. Trout love these little guys.

I don’t think that this list for the most popular brook trout flies would be complete without the Parachute Adams dry fly.  It is a tried and true fly that has consistently attracted trout for just under a hundred years.

It imitates an adult Mayfly, Flying Caddis or Midge.  Brook Trout are keen to each of those bugs, making this fly a tasty snack.

Personally the Parachute Adams is one of my favorite dry flies that I use for Brook Trout (or any trout for that matter) and is usually one of my first fly choices, many times my only fly choice for that day. 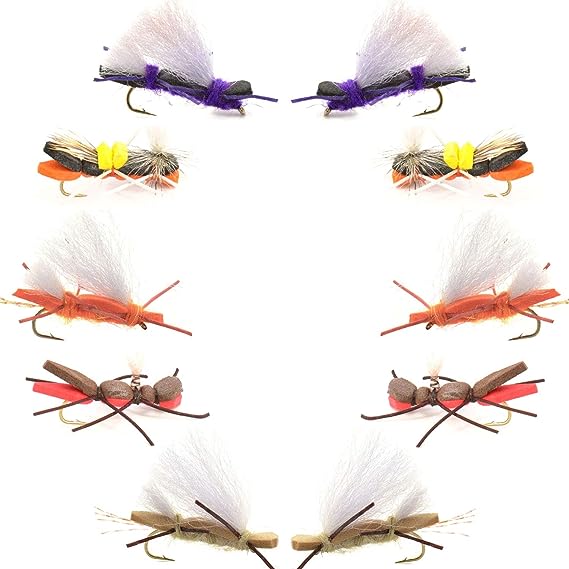 The Chernobyl Ant Fly is a combination of foam and hair used to create a killer fly for Trout fishing.

The Chernobyl Ant has grown in popularity in the past years as one of the best Brook Trout flies.  It uses a combination of string and foam to create an absolute killer of a fly.  It’s definitely an unorthodox style of fly, but the trout eat em up!

The And can be a great option to move over to when the other classic flies aren’t hitting like they usually do.  Never be afraid to throw on a new fly when the one you have on isn’t working. 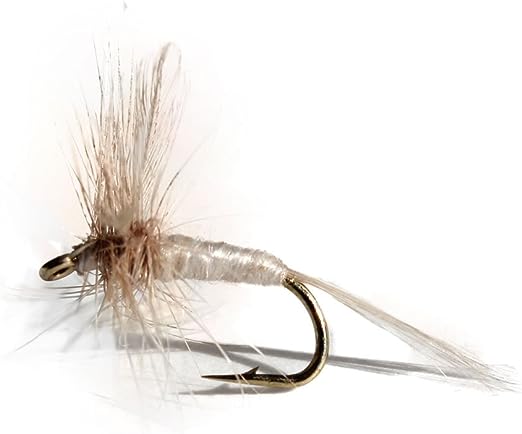 The Pale Morning Dun (or PMD) is a well know dry fly that is very popular amongst fly anglers alike.

The Pale Morning Dun is a great dry fly for Brook Trout.  It resembles an early stage of a Mayfly and the trout love em.  This fly has been very popular with fly fishermen for awhile now and deserves a spot as one of the best.

It’s a very simple design, but very effective.  Especially during a hatch.  If you are not carrying this fly with you during the Spring or Fall (hatch/ fall seasons) you are leaving a lot on the table.

Most Popular Streamers For Brook Trout 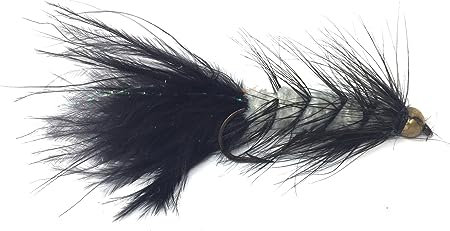 The Wooly Bugger is a popular streamer for Trout fishing. It's a versatile fly resembling small minnows, leeches and crawfish.

The Wooly Bugger is another classic streamer in the Trout fishing community.  Steamers work well in deeper water or murky conditions.  This is because these flies dip under the water, right in front of the fish’s face.

The Wooly Bugger is very versatile.  It imitates many Brook Trout meals such as leeches, minnows, and crawfish.  Not only that but you can use these flies year round.

The Muddler Minnow has been around for nearly a century now, catching Trout the entire time.

The Muddler Minnow originated in 1936, by a guy named Don Gapen.  His sole intention of the fly was to create a fly that would catch a lot of Brook Trout.  Nearly a century later, his fly still stands true as one of the best Brook Trout flies.

The Muddler Minnow imitates a wide variety of food for Brook Trout including crickets, grasshoppers, Mayflies and more.  All of which are very popular Brook Trout meals.

If you plan on going on the water at all for Trout fishing, bring some of these flies with you.

The Slumpbusters streamer is newish in the Trout fishing game, but certainly one that has made a splash.

The Slumpbusters fly is relatively new in the fly fishing world, but it’s still one of the most popular Brook Trout flies amongst fly anglers.

This streamer is big and heavy so it pushes a lot of water – you’ll probably want to run a slightly heavier setup with this fly.  But if you do, this fly can and will produce the Brook Trout.

Most Popular Nymphs For Brook Trout 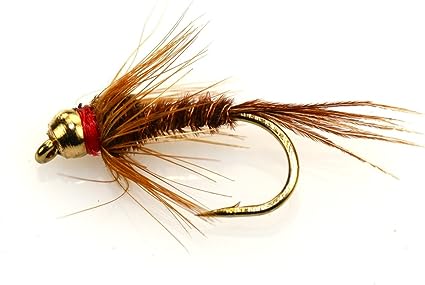 The Pheasant Tail Nymph is the first nymph you should have in your fly box. It's an absolute Trout magnet on the river and one of the most popular Trout flies ever.

The Pheasant Tail nymph is one of the oldest and most original nymphs that on the market.  To this day, it’s still one of the most popular nymphs for Brook Trout.  It imitates larvae that the trout feed on.

The Pheasant Tail works very well when its placed near Brook Trout beds, lowered and then slowly brought back up to the surface.  This resembles a natural larvae or insect movement and the Brookies can’t help but fall for it.

The Pheasant Tail Nymph is one of the most appreciated trout flies by fly fishermen.  It can produce the fish when the others can’t.

The Gold Ribbed Hare's Ear Nymph is a top 3 nymph option for fly fishing Trout in most rivers.

The Gold Ribbed Hare’s Ear Nymph is a very popular Trout fly.  For whatever reason these flies make out like bandits on the river.  It is hard to say whether it is the flashy gold chrome bead or the ribbing on it, but regardless it works.

It imitates a variety of different insects, including the Mayfly.  Since it’s a nymph (wet fly), it can be very lucrative under the surface when the typical Parachute Adams or other classic dry flies aren’t working.

The Zebra Midge is a popular Trout fishing nymph.

The Zebra Midge is a very small but deadly fly in Brook Trout streams.  When it drops under the water, the Brookies can’t resist themselves.  It imitates a Midge pupa and other small insects.

The Zebra Midge works very well when the trout are feeding higher up in the water.  As a matter of fact, I would suggest not using this nymph when the Brook Trout are in deeper water.  These flies don’t drop very deep into the water.

Bottom line although, there’s no reason not to have a couple of these little nymphs in your fly box.

Related: Ranking The Most Popular Trout Dry Flies of All Time

Those Are The Best Brook Trout Flies

Regardless of what Brook Trout flies you decide to fish with, all of these will be killers.  A lot of Brook Trout fishing is about finding the right fly, for the right situation.  Hence the wide variety of flies on the list.

There’s no such thing as the perfect fly for every situation, that’s why there are hundreds of flies available for purchase!  My suggestion to you is get a couple of different styles of Brook Trout flies and include them all to your collection.

At the end of the day, it’s all about getting on the water and enjoying the outdoors!  I hope this article helped you in your Brook Trout fly fishing experiences.  Best of luck and tight lines my friend!

Fly fishing involves making use of the equipment you have at hand to the best of your ability to catch fish. Many anglers focus on things like a solid pair of waders, a good quality fly fishing vest, various flies and other items, but it’s crucial that you don’t overlook the importance of having a

There are some gear items that you simply can’t afford to cut any corners on when it comes to fly fishing. Having a quality pair of fly fishing waders is an absolute must if you’re a dedicated fly fisherman or if you plan to step up your game and get a pair of waders that

Looking for a new fly fishing vest? You came to the right place. In this article I’m going to go over my thoughts and opinions of the Orvis Ultralight Vest.   Orvis Ultralight Vest Review First off let me give you a rundown of the positives and the negatives of it. Positives: Lightweight Dries quickly Cool

Innovation where you least expected it. The Tacky Flydrophobic Fly Box Review is here and we’re stoked to jump into it. As far as fly boxes are concerned, this is one of the best on the market. It’s brother, the OG Tacky, is worth every penny but if you’re the type that just has to

Fly boxes are my favorite piece of fly fishing gear to buy. If you’re really into the sport, whether you tie your own flies or not, chances are you’ve already started to accumulate a few flies. For fly boxes, there are several different types of boxes. Obviously, the difference between fly boxes for dry flies

I promise you, this will be the only fly fishing gear guide you’ll ever need. Each time we write about a certain piece of gear, from vests to winter fly fishing gear, we’ll link it up here. Think of this as the starting point for our website. We’ve dedicated our entire lives to catching more